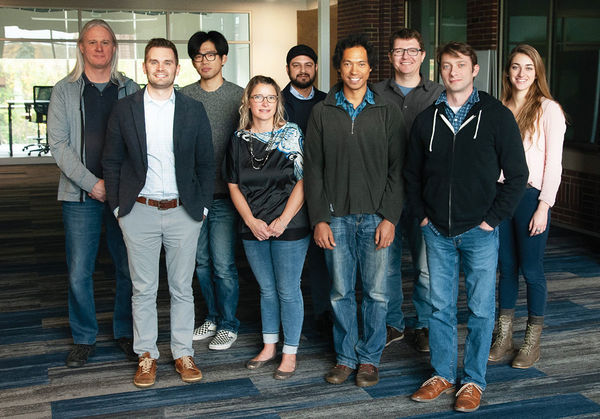 On the leading edge of rapidly-expanding blockchain technology, SIMBA Chain, Inc., a startup based on technology developed at the University of Notre Dame, empowers businesses from government and defense, and from health care to manufacturing, to develop and deploy their applications with ease.

Diverse sectors are clamoring for the security, ease and efficiency of blockchain technology originally developed for Bitcoin and Ether cryptocurrencies. In short, blockchain is a database of information wherein the records within are stored on a large network of computers rather than in one central repository. As such, no company or individual owns the system, which makes data tampering extremely difficult to do. This, in turn, establishes a high level of trust in the data. Blockchain therefore has the potential to reduce the importance our economy places on third parties to ensure the trustworthiness of data such as banks, attorneys and even the government.

“What SIMBA is bringing to the table is making blockchain easy for everybody,” said CEO Joel Neidig, a serial entrepreneur who is also director of research at Indiana Technology and Manufacturing Companies (ITAMCO) in Plymouth, Indiana. Neidig compares blockchain to a computer and SIMBA to the operating system.

Neidig began partnering with Notre Dame five years ago. ITAMCO and the University’s Center for Research Computing (CRC) won a Defense Advanced Research Projects Agency (DARPA) grant that, with the help of the IDEA Center at Notre Dame, eventually led to the formation of SIMBA in 2017.

Already, customers include major manufacturers such as Dow Chemical and Caterpillar, as well as the Air Force, Navy, Department of Energy and various health care providers. SIMBA is investigating expanding into the banking and finance sectors.

“Our customers can build out their applications and connect them to their networks in SIMBA. They use our platform as a blockchain application.”

SIMBA is a Blockchain-as-a-Service (BaaS) based in the Microsoft Azure Government cloud that makes the complex technology easy for non-specialists to leverage for making decentralized applications, called dapps. SIMBA collaborates with Microsoft and participates in the “Microsoft for Startups” program.

“We’re eliminating the middleperson, allowing customers and suppliers to communicate with each other directly,” said Neidig, adding that this efficiency saves both time and money for activities such as tracking materials. “The underlying technology behind this is called smart contracts,” or computer protocols that ensure direct transactions are transparent, trackable and irreversible.

SIMBA collaborated with the Center for Research Computing at Notre Dame, licensing its new “Aladdin” technology that enables users to store cumbersome large files on a network off the blockchain network with linked access, making the blockchain faster and cheaper.

“It has been exciting to work with SIMBA and their programmers who are based in both the United States and the United Kingdom, as collaborating with developers and researchers, as well as industrial partners, from different international backgrounds and contexts often tends to encourage novel software solutions,” said CRC research programmer and co-inventor Sebastian Wyngaard.

Adam Brinckman, senior research programmer at the CRC and one of six inventors of the technology behind SIMBA, added, “It’s not always typical that outcomes from federally funded research grants end up being commercialized. However, our research on blockchain is very applied. So, seeing it realized by SIMBA Chain into commercial use of the tools developed by our team has been impactful – and motivating – for the entire team.”

Additional inventors include Ian Taylor, distributed computing and data science research professor, who was recently named as a Top 40 Blockchain Influencer for 2018, and Jaroslaw Nabrzyski, director of the Center for Research Computing. Damian Perez and Sarah Rucker, both research programmers at the CRC, also worked on the original invention team.

“The collaboration between SIMBA Chain and Notre Dame’s CRC on Aladdin/SIBMA Chain frameworks has also led to broader research activities at the CRC. We have recently added Andrey Kuehlkamp to our team, a postdoctoral scholar who is investigating design patterns for smart contracts and the introspection of blockchain data,” said Nabrzyski.

SIMBA recently raised $500,000 of pre-seed funding to scale up its sales and development funding. The firm expects to add two or three people to its five-person staff next year, then raise another $1 million to $2 million and add 10 more. The IDEA Center’s Pit Road Fund has invested in the company.

“Working with a startup and research institution like Notre Dame provides the perfect atmosphere for the disruptive technology we built at SIMBA,” said Taylor, who also serves as chief technology officer at SIMBA.

“The University’s intellectual expertise and South Bend-Elkhart’s entrepreneurial mindset unite to develop early-stage technologies and move them to commercialization, often with sponsored research agreements that involve a series of grants as the projects progress, Neidig says.

“Notre Dame has the technical prowess and the minds to do it,” he says. “You merge that with the entrepreneurial spirit that is around the area and you have a perfect equation for high-potential startups that can make a big splash – disruptive technologies.”

SIMBA Chain, Inc. was formed in 2017 from a grant awarded by the Defense Advanced Research Projects Agency (DARPA) to Indiana Technology and Manufacturing Companies (ITAMCO) and the Center for Research Computing (CRC) at the University of Notre Dame in order to develop a secure, unhackable messaging and transaction platform for the United States military.

SIMBA Chain is a cloud-based, blockchain-as-a-service (BaaS) platform, enabling users across a variety of skill sets to implement dapps (decentralized applications). These apps allow secure, direct connections between users and providers, eliminating third parties. The easy-to-use platform is tailored for users, developers, government, and enterprises to quickly deploy blockchain dapps for iOS, Android, and the web. Learn more at simbachain.com.

About the Center for Research Computing:

The Center for Research Computing (CRC) at the University of Notre Dame is an innovative and multidisciplinary research community that supports collaboration through advanced computation, data analysis, and other digital research tools. Facilitating discoveries in science, engineering, the arts, the humanities, and the social sciences, the center is comprised of four groups: high performance computing, cyberinfrastructure development, research software development, and data science, including the Center for Social Science Research. To learn more about the center, please visit crc.nd.edu.

About the IDEA Center:

Standing for Innovation, De-Risking and Enterprise Acceleration, the IDEA Center is the fundamental resource for all commercialization and entrepreneurial activities at the University of Notre Dame. It provides the necessary space, services and expertise for idea development, commercialization, business formation, prototyping, entrepreneurial education, and student entrepreneurial efforts. It is designed to bring the best Notre Dame faculty, staff, and student ideas and innovations to market. To learn more about the center, please visit ideacenter.nd.edu.

Originally published by Nick Swisher at ideacenter.nd.edu on February 04, 2019.