Thank you to the National Science Foundation for funding the Computational Social Science REU Site at the University of Notre Dame - Award #1852457.

The following are projects within the Computational Social Science REU:

Friendship Social Network and Alcohol Use

According to the 2015 National Survey on Drug Use and Health, 58% of full-time college students aged 18–22 drank alcohol in the past month, 37.9% reported binge drinking and 12.5% reported heavy alcohol use in the United States. Hingson et al. (2002) estimated that more than 150,000 students developed an alcohol-related health problem each year. Friends are key to whether, when, and how much adolescents drink alcohol and are also central to prevention (e.g., Burk et al., 2012; Crosnoe et al., 2007; Fisher et al., 1988). Until very recently, however, the relationship between friendship network and alcohol use has not been studied empirically. Using data collected from our lab, we will apply different statistical methods to understand how friendship network and alcohol use are connected in the hope to find ways to better prevent alcohol abuse among college students.

Allison Cheng’s primary research interest lies in data mining on large-scale educational and psychological assessment data, such as, the Trends in International Mathematics and Science Study (TIMSS) data from over 60 countries, with about 4,000 participants in each country answering questions about their knowledge on math and science. This requires sophisticated statistical models to account for sampling characteristics, missing data, the multilevel structure in the data (i.e., participants nested in classes, classes nested in schools, and schools nested in countries), and linking and scaling (as the TIMSS runs a 4-year cycle).

CRC Software Development Manager Agnieszka Marczak Czajka will be advising on LockLuck - a project that combines neural networks and psychology. At this stage of this project we investigate the relation between picture transformations and emotions. The Research assistant working with us on this project would be involved in various aspects of training convolutional neural networks, using them to generate “deep dream” images, and performing network architecture search.

CRC Assistant Director Software Development Caleb Reinking will be advising on the new YWCA CPI Research Project. Research has shown that female adolescents are less likely to display interest and motivation in the pursuit of math and science education, underrepresented minority students score lower averages on math and science tests, and females and URMs are less likely to pursue careers that are heavily math or science dependent. Suggesting, recommending, and measuring the outcomes of diverse students’ paths toward computer science through a disparate set of networked programs has not been successful due to the complexity involved. The CPI App incorporates a ‘visual map’ of where the student is along their ‘custom pathway’, which is powered by a machine learning algorithm. This project will look at the data generated by the CPI application and ecosystem and develop methods of evaluating the data for efficacy. The project will also develop suggested platform improvements that may improve the CPI platform to better recommend and engage students along their learning pathway. 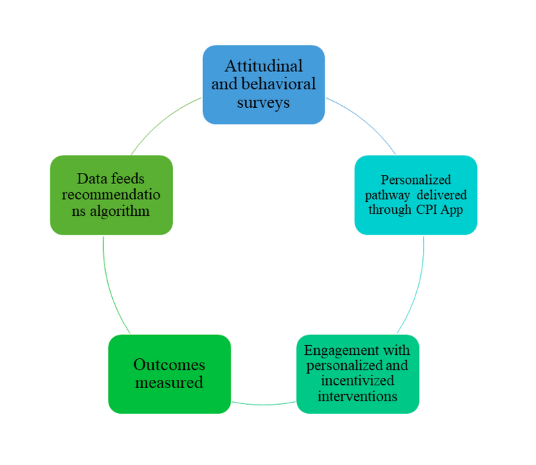 Susan Alexander’s research focuses on the construction of masculinity in various media platforms including the “branded masculinity” of men’s magazines, the critique of men not fulfilling traditional gender roles as found in advice columns in women’s magazines, the “masquerade of masculinity” in Halloween costumes, the historical shift in boyhood masculinities as seen in Boy’s Life magazine, and “hyperauthentic masculinities” in reality television programs. The most current research project is an analysis of masculinity in white supremacist discourses as found in hate music videos since the 2016 presidential election. Social media, notably YouTube, is the most frequently used method for recruiting white supremacists today. The goal for REU students will be to develop a media based research project examining masculinity in white supremacist discourse in a media platform of their choosing (e.g. Internet  memes, Twitter, YouTube, an Alt-Right social media sites such as Gab, or a gaming site like Discord) using one or more of the data mining techniques learned over the summer.

NetHealth: Modeling to Co-Evolution of Social Networks and Health Behaviors

This project, funded by a multi-year grant from NIH, examines student’s social networks and two important health-related behaviors – physical activity and sleep habits. Social network data is collected through capturing information on people’s communications through their smartphones while sleep and activity data are collected through Fitbits. Seven hundred first-year students were enrolled in the study in 2015, resulting in over two years of data. With these two streams of data we are (1) testing theories about the mechanisms linking networks and behaviors and (2) assess the extent to which social influence processes within networks lead to changes in these two important health-related behaviors.

Economics of the Family

Kasey Buckles is an Associate Professor in the Department of Economics. Her research interests are in the area of the economics of the family, including work on marriage and fertility decisions. She has previous work on the role of marriage in improving infant health outcomes and on the effects of public policy on the effects of spacing between siblings on their academic outcomes. She has also explored the timing of fertility within the year and across women’s careers. Research with Professor Buckles would involve creating and working with various data sets in Stata (a statistical software package) to aid in research related to families and child well-being.

The Wilson Sheehan Lab for Economic Opportunities (LEO) is a research center in the Department of Economics at the University of Notre Dame. Through rigorous impact evaluations, LEO aims to identify the innovative, effective and scalable programs that help people move out of poverty. LEO focuses its evaluations on innovative and scalable initiatives that have the potential to reduce domestic poverty. Our current evaluations span a wide range of anti-poverty initiatives.

In the past fifteen years, scholars have developed sophisticated understandings of the general conditions that increase the likelihood of civilian mass killings, but these and other works have largely focused on the conditions that elevate risk, rather than systematically examining the events or chains of events that trigger violence at a certain point in time. This project proposes to use new statistical and natural language processing (NLP) computational tools for a systematic and wide-ranging analysis of triggers of state-led mass killings.

The main goal is to advance our understanding of the timing and dynamics of political violence escalation, by examining systematically how certain types of political events may catalyze a government’s policy of civilian mass killings.

The project will also provide pathways for the general application of promising NLP and statistical methods to the analysis of social event triggers as gleaned from big data repositories. Students will learn and apply Natural Language Processing and Machine Learning techniques to help machines analyze millions of global news articles with potential triggers. 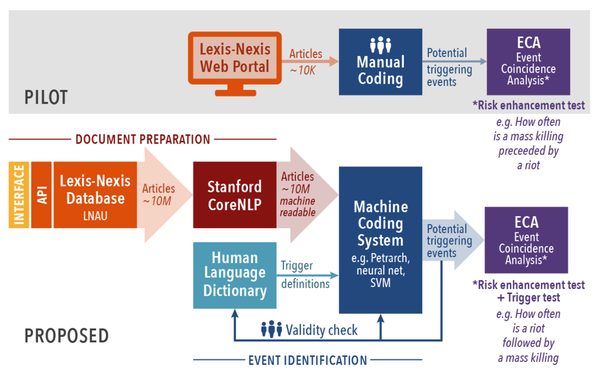